APPLAUSE: A special thank you to all teachers 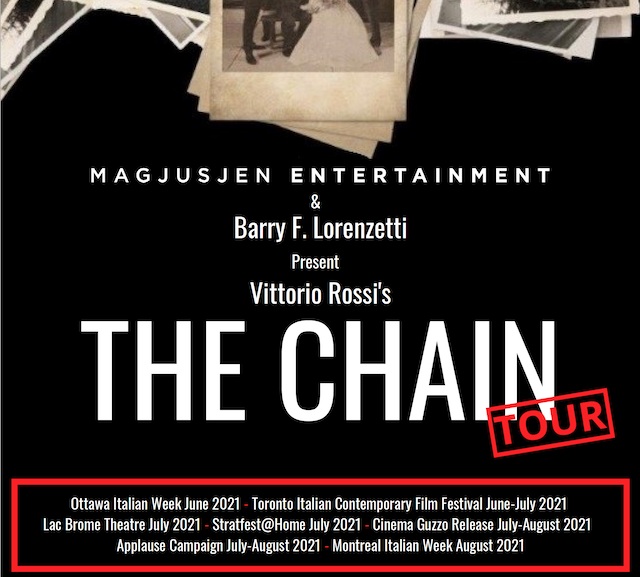 As a special thank you to our teachers who have worked tirelessly during this pandemic and done their jobs with grace and without complaint as they always do; Magjusjen Entertainment through their APPLAUSE Campaign would like to offer the screening of their film The Chain for free.

“Having worked as an artist in the classroom, I know firsthand the work ethic teachers have , the dedication, the stress and for this reason alone we want to say thank you, said producer Susan Fuda. “Our executive producer, Mr. Barry F. Lorenzetti personally put us to the task and wanted us to say thank you for looking after our children, our grandchildren, our nieces and nephews in what can only be described as a horrible year. What better way than to relax in a quiet cinema and let the story take you away. “

Vittorio Rossi’s film The Chain will be released at Guzzo Cinemas on July 23 and on designated days between July 26 and Aug 5 will be screened for free for all our teachers in the greater Montreal area. A special invite website will be set up where teachers can sign up and download their free tickets.

The Chain, which highlights the dramas faced by a first-generation Italian immigrant family in Montreal, broke box-office records at The Centaur when it debuted in 1988. The story revolves around Tullio Testa, a modest landscape contractor, who is anxious to impress his visiting brother from Italy with his success in the New World. Tullio and his brother have not spoken for over twenty years due to a dispute over land inheritance in Italy. To create the appearance of a man of leisure, Tullio turns the business over to his sons, putting Massimo, the younger, educated, favourite son in charge. Joe, who has worked alongside his father in the dirt, is shunned. Massimo makes a fatal business error which puts the family company in jeopardy. Joe emerges as the one who will break through the façade. Refusing to put on la bella figura and act the happy family charade for his cousin Rina’s wedding to a WASP accountant, he ignites the true emotions that govern the family dynamic. The whole explodes in a family war between father and sons that wrecks not only the family garden, but forever changes the dynamics within the family.

The filmed play will screen at multiple events this summer including Guzzo Cinemas, Lac Brome Theatre in Knowlton, Ottawa Italian week, Montreal Italian week, and the Italian Contemporary Film Festival in Toronto and at Stratfest@home.

Its sequel, Legacy, which is set thirty years later, will make its debut next June 2022 at the Leonardo DaVinci Centre.

You can watch the trailer for the filmed play here:

Vittorio Rossi is an award-winning playwright and actor who hails from Ville-Émard. He writes stories about universal family issues and about the Italian immigrant experience and he is widely considered to be the inaugural Italian-Canadian voice on the English-Canadian stage.

Born on April 16, 1961, in Ville-Émard, to a working-class family of Italian immigrants, Rossi studied theatre at Dawson College and obtained a fine arts degree from Concordia University’s theatre department in 1985.

He burst on to the theatre scene in 1986 with a one-act play called Little Blood Brother, which won the Quebec Drama Festival’s best new play award - a prize he took again the following year with Backstreets.

While writer-in-residence at the Centaur Theatre, he wrote his first full-length play, The Chain, which opened the theatre’s 20th Anniversary season in 1988. Since that box office record-breaking debut, he has gone on to write nine plays.

Rossi’s early plays set the tone. According to critic Gregory Reid, they “established his reputation for edgy, testosterone-charged, emotional family dramas, and earned comparisons with David Mamet, while displaying admiration for the work of Arthur Miller and Tennessee Williams.”

In 1998, Rossi’s play Paradise by the River was independently produced and garnered rave reviews for its searing look at the internment of Italian Canadians in the Petawawa, Ontario, prisoner-of-war camp during the Second World War.

Rossi returned to the Centaur in 2006, with three masterful plays forming A Carpenter’s Trilogy, and again in 2015, with The Envelope, a comedy that skewered the Canadian film scene.

Vittorio Rossi has also appeared as an actor on television, in movies and in the theatre.